We met Renny because she was seeking a surprise gift. Her boyfriend had mentioned a while back he always wanted an old school classic. Renny recalled first hearing this while they drove on the freeway one day. Tim saw a classic and mentioned his hope to have a classic car as they passed. His dad was a photographer for the racetracks, so he was around supercars his whole life.

When Renny noticed that Tim would mention on occasion someday owning a classic car, she thought she should just do it for him. She knew he would never do it for himself. She could hear the battle in his head, how he went back and forth with himself for quite some time. Renny knew he would not likely spend the money on himself. Knowing him, she also knew he would always question if he made the right decision should he ever pull the trigger to buy one himself. Knowing this, she began to investigate doing it herself.

Renny explained they’ve been a couple for almost three years now. She met Tim when her daughter was only a few months old at most. Being a single mom can be difficult, but Tim really stepped up to the plate for her and her daughter. In these three years they have blended their families. Tim also has a three-year-old daughter, and she is only a month older than Renny’s. It’s like they have twin girls because they act and love each other like sisters.

Renny did not know what classic car to research since Tim likes trucks. She felt true muscle cars were a far different breed than the Subarus her brothers drove. She has always been attracted to and had admiration for the muscle cars. Renny explains, “even my daughter is drawn to the classic muscle cars because whenever she sees one, she looks at it differently, she has a brighter twinkle in her eye.”

So Renny kept it in the back of her mind. Every time Tim would mention a classic car, she would write it down on her Notes app in her phone. She had a file of things he would say: what colors he liked; the types of interiors he liked, and even a full list of what he would do if he were to customize his own classic. She has notes on it all.

Tim mentioned liking cars such as the Chevelle and Impala. In truth, he mentioned all kinds of classic cars. For Renny she just felt the Chevelle matched him more. As she listened, Renny decided on a Chevelle because she just felt it matched his personality. To her it was a true “muscle” car. It reminded her of Tim, and she could see him in one more than all others she researched. She planned to fly her brother-in-law’s father out to Las Vegas to help her select a great car for Tim since he builds cars.

Before that happened, in doing her research she found Gateway Classic Cars and saw we had quite the selection of Chevelle vehicles. Renny knew Tim wanted a Super Sport, but she wanted to get him more of a cruiser, not something too fast. Thinking of their girls, she wanted something for the family. Something that was cool and more something the whole family could enjoy instead of a car Tim might race down the freeway. She thought, “can we NOT get him a Super Sport, let’s just get him a Malibu.”

That is when she saw it, this beautiful 1970 Chevelle Malibu in our Las Vegas Showroom. It was exactly what she wanted for him. It looks bold, it looks strong and manly, she knew this muscle car was the one. She imagined him inside of it and thought it fit him perfectly. It was bright, it was very strong, it was a beautiful car, and it had such structure to it. Renny felt the car calling to her because it was a lot of what Tim is to her. She explained, “it is him in car version,” then clarified, “except not a Super Sport because I do not need him driving crazy on the freeway.”

All the important people were with her when she made her purchase, it was a family affair. Since Tim was on business in California, Renny planned to hide the surprise in the garage and park the other car in the driveway. Except as always happens in life she was thrown a curveball. The same day she drove the Malibu home Tim called to say he would be home the next day, which naturally caught her off guard.

The next day while picking Tim up from the airport, Renny lied to him saying she needed to use the restroom and couldn’t wait. They met at the baggage claim carousel and walked out together. Renny then claimed she parked somewhere else on the lot, and as they walked along making casual conversation about his trip Tim sees his Chevelle Malibu and comments, “Damn that’s a nice car!”

Tim stops and looks at her and says, “no way.”

Tim just stood there as she gave him the keys. He was completely floored and exclaimed, “NO WAY!!!

Renny explained Tim was able to guess before she handed him the keys because she nearly started crying. That was how he knew; she didn’t have to say a word. Otherwise, he had NO idea and was overwhelmed.

Tim was super stoked and expressed his gratitude the whole ride home. He told her, “I would never have done this for myself and the fact that you did this for me means so much more.”

Renny worked hard to pull off the surprise. Not just financially, but secretly going behind Tim’s back and not answering his calls when she was at the Gateway showroom. She would close all the tabs in her phone in case he saw over her shoulder. Once home Renny showed Tim the screenshot of her notes that dated back two years. When she showed it to him, he was seriously flabbergasted, and said “no one has ever paid attention to me like this before.”

It meant a lot to Renny, because Tim has done so much for her, her daughter, and for her whole family. She says a car, even one that is a Chevelle could never repay him. Yet, seeing him get it and how he was a kid in a candy store, she felt was such a blessing to witness. Not even giving it to him, but to witness him receiving it and be that happy is just priceless to her.

Tim was proud of her – because Renny admits she knows nothing about cars, yet she found the perfect car for him. One in great condition and looks so sharp. She explained to Tim that the team at Las Vegas Gateway Classic Cars really looked out for her. They reassured her that she was making a great purchase. They told her the guy who restored the car has done multiple cars and has done business with Gateway before. All of which made her feel more comfortable about it.

Renny’s plans worked better than anything she could have imagined. Planning for two years and yet Tim had NO idea. It was perfect. Originally, she was thinking of getting him one for Christmas, but it was too chaotic at that time of year. One of the girl’s had a birthday party in November and the hectic holiday season overall, it was too much. She then planned for Father’s Day. But it all came together, and he got it for Valentine’s Day instead.

One of our favorite elements of her story is her careful and long-term planning. The best part is to anyone else, it would appear she was halfway paying attention as she messed around on her phone. When in reality, she was taking dictation as he spoke, not ignoring him as it seemed. 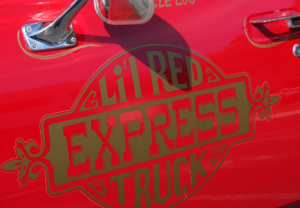 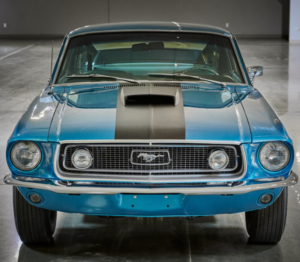