Hardcore car enthusiasts know there is always one vehicle in their collection that has unexplainable sentimental meaning. For Kathleen it was her 2004 Volkswagen Beetle GLS.

Kathleen Schroeder fell in love with Volkswagens back in high school (early 70’s) but her dad wouldn’t let her have one. In 1974, she married her husband, Steve, and her journey into Volkswagen ownership began. Steve owned a 1964 convertible Karmann Ghia that the couple kept for several years. Kathleen would drive the Ghia all the time. They replaced it with a used hard top Beetle and many years down the road bought a new Volkswagen Jetta.

Kathleen stated, “We had several different cars in-between but, in my heart, I always wanted a red, convertible VW Beetle.”

In 2004, her wish was unexpectedly granted when the car she owned became totaled after being rear-ended. Kathleen was finally on the hunt for the red VW Bug that she spent years dreaming of owning.

Her search concluded when the perfect Bug finally caught her eye. Kathleen purchased a fully loaded (at the time) 2004 Volkswagen Beetle GLS with a turbocharged 2.0-liter engine that produced 180 hp and 173lbs of torque. The engine was mated to a 6 speed Tiptronic Automatic transmission with overdrive. Her Beetle was absolute perfection with its eye-catching red paint and black convertible soft top.

The love Kathleen had for her Beetle was shown through the meticulous care she gave it. Kathleen was the sole driver, always kept it garaged and impeccably clean to the extent the Bug was hand washed only. She takes pride in the fact that the Beetle never saw the inside of an automatic car wash. And to make sure nothing happened to her baby, Kathleen confessed that “never once did I drive over the speed limit”.

When Kathleen and her husband bought a house in Arizona, many years before retiring, the VW Beetle came along for the journey sans trailer. Then, in 2020, the couple bought a Ford 150, a Grand Design trailer and a Toyota Rav 4 hybrid which left the Beetle sitting out of all the fun.

Kathleen hated to see her beloved beetle just sitting lonely in the garage. She thought “Volkswagens can go 300,000 miles; someone should be able to have a lot of fun driving the car with the top down in nice weather”. 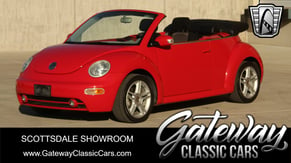 Plus, Kathleen and her husband are both nearing their 70’s and they don’t want to leave their children with a bunch of material items to worry about reallocating should anything happen to them. The thought crossed her mind to gift her 15-year-old granddaughter the Beetle but, with 3 other grandkids that “just didn’t seem fair”. So, Kathleen and her husband decided to consign the VW Beetle to Gateway Classic Car’s Scottsdale showroom.

“Gateway Classic Cars is wonderful. We just sold our VW with them, Tim Johnson (Inventory Consultant at Scottsdale Showroom), is the best from start to finish. My car sold within a couple weeks. Even though our car wasn’t the most expensive one in the showroom, he treated our car like it was. Thank You!” – Kathleen stated about her experience.

Even though Kathleen misses seeing the Beetle in the garage every day and it was extremely hard to part with, she knew she couldn’t keep it forever. The fact that it has a new home with plenty adventures ahead brings joy to her heart. Kathleen concluded, “It was really hard for me to let it go because it had special meaning for me. I probably won’t feel that way about another car we ever own but, it was time to let it go. Hopefully whoever bought it will love it as much as I did. Tim was wonderful to work with and I sincerely appreciate him selling my car.”

If you would like to learn how to consign your vehicle with Gateway Classic Cars, click on the link: https://www.gatewayclassiccars.com/consign or call us at (866) 383-1416.