The Dodge Charger is an American icon birthed when wicked styling and ridiculous amounts of horsepower came together. Gateway Classic Cars of Scottsdale is proud to present this Charger R/T SE, it is reminiscent of an era of boundless optimism and a future without limits. It is a perfect representation of when image, style, and performance merged into American Muscle.

This second generation of Dodge Charger was a success overall, experiencing a 343% jump in sales over its previous 1967 model. Having caught the public’s eye, a 1968 Dodge Charger made its film debut against Steve McQueen in a Mustang Fastback in ‘Bullitt’ where the audience watch as they tear up the streets of San Francisco. Most film historians consider ‘Bullitt’ to be the quintessential car chase movie of all time and its innovative use of small remote cameras mounted inside the cars during the chase became a standard for all that followed.

Another iconic Charger starred on the smaller screen on the hit TV series, ‘Dukes of Hazzard’ a decade later. The show aired from 1975 to 1985 and featured ‘General Lee’ – a Hemi-Orange 1969 Charger R/T performing spectacular jumps and tire-squealing getaways in every episode. Even though the 1969 Dodge Charger is known as one of the easiest classic cars in terms of maintenance, CBS purchased roughly 300 1969 Chargers for stunts. These feats of fiction destroyed one or two of these vehicles each episode, but they in turn fueled a greater interest in the Dodge Charger.

The FM3 paint code is a shockingly bright hue. Never seen on a car before its January 1970 debut, it could be found on the Mopar muscle cars filling showrooms by the early spring. This is not Barbie’s Muscle Car. Only the boldest and baddest cars would dare rock Panther Pink. Naturally, this extends to its driver, for only a man comfortable in his own machismo power would dare be as brash to drive such muscle and might in what some consider an effeminate color. 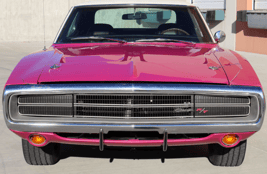 Just look at this beast! There is nothing pansy about it!

Muscle and might was proven by Buddy Baker as he made history at Talladega Speedway. Buddy became the first person officially timed at more than 200 miles per hour in a Dodge Charger Daytona. That record lasted for over 13 years. The 1970 Charger had ten wins for the NASCAR season that year. The car dominated racing so much that NASCAR eventually placed restrictions on the HEMI engine.

The Charger 500 was dropped in 1970. Since the Daytona was making speedy finishes the 500 was no longer needed for racing. Chrysler introduced the 1970 Dodge Charger to the public during the fall of 1969. The Muscle Car Market was in full explosion and Mopar fans enthusiastically flocked to showrooms to purchase the new Charger.

Perhaps it’s best to think of the original Charger as a blend between personal luxury and pony cars. The Charger was based on the Dodge Coronet and similarly the models were available with either a six or eight-cylinder engine. They were designed under the direction of Elwood P. Engel, and were similar to stablemate brand, the Barracuda. The body colors were not the only difference, there were few changes in exterior and interior styling as well.

The emblematic front grill design improvements featured a large wraparound chrome bumper that completely encircled the grill and the popular hidden headlamps. New electric headlight doors replaced the old vacuum style. No longer divided down the middle, the coupe now sported a full-width single opening grille, accented by a chrome treatment with side scoops and a scripted “Charger” badge.

Another great feature was the Charger’s aerodynamic rear end styling and the 500 and R/T models’ new fully spread taillight panels accented with their rounded taillights. Driver and passenger door scoops can still be seen but the R/T model received rearward facing fiber glass scoops with a large “R/T” emblem. Also, the R/T got a longitudinal stripe instead of the bumblebee stripes.

The SE “Special Edition” trim option like on this vehicle added luxury features and refinements like leather bucket seats, woodgrain steering wheel, and woodgrain inserts on the instrument panel. Also included were chrome rocker moldings, deluxe wheel covers, and hood-mounted turn-signal indicators. The SE package could be had by itself or with the R/T package, making an R/T-SE, like this one here.

The life of the Dodge Charger began by combining impeccable style with powerful performance and became a ’60s automotive icon. The 1970 Charger was the final year of the shape widely regarded as one of the best-looking “muscle cars” of the era. And it is easy to see why. Total Charger production for 1970 was 49,768 cars, with the Charger R/T count at 10,337. It came to an end starting when muscle cars with motors over 400-cid were considered “high risk” vehicles, which lead to higher insurance premium costs. That, the rising gasoline prices, and the introduction of the new Dodge Challenger caused sales to slip. Dodge wrapped its final production of its fourth generation in 1978.

If you would like to learn more about this gorgeous Mopar, please contact our team in the Scottsdale Showroom.