Gateway Classic Cars of Denver is proud to present this rare and beautiful barn find, a 1969 Chevrolet Corvette L88 Stingray.

Work began on the C3 model Corvette, otherwise known as “The Shark Generation” while the paint was still drying on the second-generation’s mid-year models. The C3 Corvette was more than a reimagining of the earlier C2, rather it was an entirely new take on the sport car. Its body-styling was a new hybrid taking styling cues from mid-engine concepts, the Chevy Mako II, and the Pontiac Banshee. All helped inspire the final Coke bottle look. At its launch in 1969, the “shark” became a Stingray, revised as a single word, and a throwback to the spelling Bill Mitchell had originally used for his 1959-1960 Stingray race car.

Enough about styling. What truly makes this vehicle so special is that it is an L88 Corvette, meaning a 427ci engine with a race-ready option package. Only a total of 216 L88 Corvettes rolled off the St. Louis Corvette Plant assembly line during its three model years. In 1969 production peaked having the highest count of 116. Chevrolet Corvettes with the 427ci L88 engine option are some of the most coveted and collectable Corvettes ever produced because of their rarity and performance level.

The L88 story begins with Zora Arkus-Duntov whom GM awarded Corvette chief engineer title in 1967. He was the first to inspire a larger engine in the Corvette and turned the 1956 version into a genuine sports car. Duntov later persuaded GM to race and upgrade the Corvette into the L88 believing it to be invaluable publicity that would capture the younger generation’s boundless enthusiasm for the horsepower war raging in Detroit. For a car to be eligible for racing events, they had to be a standard factory option available to the public, which GM did but almost in secret.

Duntov was correct because it was a successful launch of Chevrolet’s famed L88 engine. When the Corvette L88 made its debut appearance at Sebring in 1967, it had the fastest lap of 3 minutes and 14 seconds and finished first in the over five-liter GT class and tenth overall. The result was that the L88 became synonymous with Corvettes and with champions. It made the Corvette an overnight sensation with the public at large, much to the vexation of GM and Duntov.

The L88 Corvettes were essentially race cars that could be driven on the street, except no one really should. The L88 was developed for the track and not intended for regular use. As Steve Kelly wrote in his April 1969 Hot Rod magazine article after a road test, “The L88, even in showroom form, is closer to being a racer than a cruiser, and it would seem almost sacrilegious to see an L88 Vette serving duty as a transportation machine only.”

GM tried every method to discourage the average enthusiast from purchasing an L88 Corvette. Duntov knew that most people were clueless about exactly what they were or how to take care of these beasts. For one, the L88 was not listed among the available options and was more a secret offering. Several creature comforts were eliminated too. There was no radio, no power steering, and no air conditioning. When that hardly worked, GM also fudged the numbers by cleverly claiming an underrated horsepower of 435 when its real power output was likely somewhere between 540 and 580. Finally, the L88 Corvette came with a warning sticker glued to the center console that these vehicles required super high-octane gasoline rated at 103. There were only select gas stations who had this type of fuel available, meaning the L88 Corvette could only be fueled in certain parts of the country.

The Corvette’s popularity continued to soar thanks to a love story between astronauts and Corvettes. It all started with Alan Shepard Jr. who was the first American in space. Alan arrived at his Space Program training in his 1957 Corvette. After Shepard’s historic flight, then GM Executive Edward N. Cole presented him with a new, white, 1962 Corvette outfitted with a customized space-age interior. Corvette historian Jerry Burton said in a 2011 interview, “astronauts were the American heroes that every child idolized and every adult respected, that so many of them drove Corvettes really helped establish the Corvette as America’s sports car.”

When Jim Rathmann retired from racing after winning the 1960 Indianapolis 500, he opened a Chevrolet-Cadillac dealership near the Florida Space Center in 1961. He sensed their “need for speed” as navy test pilots would make the astronauts the perfect pitchmen for the Corvette sports car. With the collaboration of Ed Cole, the new GM President they created a special Corvette lease program of a mere $1 to Apollo astronauts. Thereby bypassing the “no gift” policy at NASA.

The Apollo 12 trio were the only astronauts to special order their lease program Vettes. Charles Conrad, Dick Gordon, and Alan Bean were an all-Navy crew and decided to get all the same cars in a color scheme designed by Bean. “I don’t know why, being Navy guys, we didn’t pick blue and gold,” Bean says, “but we were busy with Apollo 12, so we didn’t have time to think about it too much.”

There are many stories of them racing each other down the streets of Cape Canaveral in their adrenaline pumping AstroVettes. Numerous photos of the era depict the Apollo 12 crew posed with beaming grins alongside or on top of their spectacular AstroVettes. NASA worried that a subsequently published LIFE Magazine photo of the space-suited Apollo 12 astronauts and their matching Corvettes could be misconstrued as a product endorsement. Which is forbidden. The astronaut’s sweetheart deal for new Corvettes all but ended by 1971.

Due to stringent emissions standards, the L88 was canceled in 1969. Yet in those three short years, L88 Corvettes forged a legendary reputation for unsurpassed performance. This barn find survivor is a poignant reminder of an era when an average enthusiast could walk into any Chevrolet dealer in the nation and buy the most powerful production car in the world. 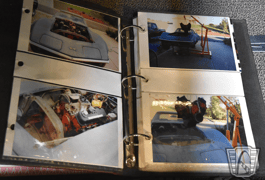 If you would like to learn more about this rare 1969 Chevrolet Corvette L88 Stingray, please contact our team in the Denver Showroom.