This iconic and highly recognizable Bedford J2 Luton is a piece of movie and automotive history. Warner Brothers Studios rebuilt six of these Bedfords for the 2005 Johnny Depp’s ‘Charlie and the Chocolate Factory’ movie. This is one of the only two that remain. A must see for any vintage car or film enthusiast.

Vauxhall was originally a pump and marine engine manufacturer when it was founded in 1857. Renamed “Vauxhall Iron Works” upon purchase by Andrew Betts Brown in 1863 they started producing travelling cranes. Its name changed again to Vauxhall Motors Ltd. when the company began manufacturing cars in 1903. General Motors Corporation (GM), one of the big three automakers, long had intentions to create Britain as a launch point to the European market. Late in 1925 General Motors acquired Vauxhall Motors for $2.5 million.

When GM gained ownership, they moved their British Chevrolet manufacturing plant to Luton in Bedfordshire. The move led to a big expansion of production. The Great Crash 1929 made the importation of American trucks financially unviable. As a result, Bedford Vehicles was established as a subsidiary of Vauxhall Motors in 1930 to manufacture commercial vehicles.

Here GM produced AC (light van) and LQ (lorry, ambulance, van, and bus) models at Luton from 1929 to 1931. These were styled as “Chevrolet Bedford” vehicles. Then in April 1931, the name “Chevrolet” was dropped, and the first Bedford, a 2-ton lorry, was produced. It was virtually indistinguishable from its LQ Chevrolet predecessor, as the Chevrolet LQ and AC overlapped in production for an additional year.

Bedford’s original success was in large part due to the overhead-valve (OHV) six-cylinder Chevrolet engine, now known as the Chevrolet Stovebolt engine. This 6-cylinder OHV petrol engine equipped with a four-speed synchromesh transmission was well ahead of its time and quite rare in Europe. As a result, Bedfords are among the most well-known British trucks. They were reliable and became a great success for these commercial vehicles were versatile and unpretentious “workhorses” or “king of the loads” as this advertisement details.

They could be found anywhere in the British Isles and around the world. This style of commercial vehicle body incorporates an enclosed box body extended over the cab. The extended portion that rests over the cab is called the peak. It is also referred to as a “kick” or a “Luton” because the town of Luton, in Bedfordshire is where the vehicle’s manufacturing plant was located.

The Second World War loomed just as things were picking back up for Vauxhall. It was at this time they began developing 15cwt trucks for the British War Office in 1935. And in 1939 all production of civilian vehicles ceased to focus on the war effort. They redesigned the O Type for military use (OY, a military flatbed, tanker, or the OXA, a heavily armored lorry). They added the OW for essential civilian use during the war and created the Bedford QL in 1941.

The Bedford QL was a military 3-ton 4×4 general service truck nicknamed the “Queen Lizzie.” It was a radical departure in design, and stemmed from development of a four-wheel drive, forward-control lorry. It entered service in March of 1941 in a variety of roles, such as artillery tractor, gun porter, command vehicle, wireless lorry and petrol tanker, as well as the troop-carrying QLD. The latter being the most common variant. These vehicles and the O range versions started Bedford’s long legacy with the British Army, and many were also supplied to the Soviet Union in WWII.

After WWII, Bedford returned to pre-war development and production of civilian vehicles. Bedford released the A series in 1953 with numbers 2, 3, 4 and 5 denoting the weight rating. The bonnet series Bedford TJ, also known as the Bedford type J replaced the TA series in 1958. Although its design was similar in style, it was a modernized version of the TD range and was produced by Bedford and their successors (1987 GM sold Bedford name to what became AWD Ltd.) from 1958 to 1998.

Bedford TJ series was available for purchase in the United Kingdom up until 1975. GM withdrew the TJ from the UK market but still manufactured them for export to India, Pakistan, and other developing countries where they sold in great numbers due to their reliability and relatively low price. This export production continued after the 1986 sale by AWD into the 1990s, until the last 100 TJ trucks were exported to Kenya in 1998. 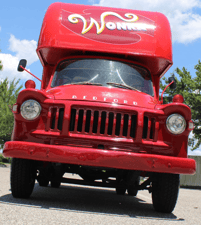 Bedford was very successful and did well for most of its life, and many of its trucks were wildly popular, namely the S, the CF, and the venerable TJ and TK cabovers. If GM had managed the brand properly it could have been something bigger. Kantaka Automobile bought the license to produce the truck from knock-down kits by AWD in 1992.

Although the Bedford name no longer exists today, it still holds its strong reputation for the workhorses they are. If you would like to learn more about this historically relevant 1968 Bedford J Box Truck Charlie & The Chocolate Factory movie star, please contact our team in the Tampa Showroom.