There was a time when four-wheel-drive vehicles were not for the daily drive experience, rather they were more a specialty. The first on record was presented at the 1900 World Exhibition in Paris but was clumsily heavy and too costly for popular consumption. Spanning as far back as the 1930s, Ford offered 4×4 conversions through the company Marmom-Herrington. Yet, it was complicated and costly. It required owners ship their truck to Indianapolis where Marmon removed the body, drivetrain, suspension, and front axle so the 4×4 components could be installed.

The average Joe became exposed to the ruggedness and versatility of 4×4 vehicles while being G.I. Joes in World War II. These vehicles proved themselves on the fields of war and when these servicemen returned home, demand grew for the usefulness of Willys Jeeps and Dodge Power Wagons. Each offered a factory 4×4 option to the consumer market post WWII. Many Veterans wanted the same in their civilian trucks, and NAPCO (Northwestern Auto Parts Company) was a perfect fit.

Founded in 1918, NAPCO began as a scrapyard that grew into an industrial parts manufacturing company. During WWII, they helped the war effort by producing specialized mechanical parts for the Big Three and American military vehicles to withstand harsh war conditions. As early as 1942 NAPCO started building four-wheel drive assemblies to be fitted to existing trucks.

After the war, NAPCO shifted gears and re-directed their vast engineering and manufacturing experience into focusing on producing peacetime machinery for the private sector. General Motors did not offer a factory-built four-wheel-drive pickup truck, giving NAPCO an opportunity. They began to manufacture their famous Powr-Pak 4×4 conversion kits to meet this demand.

The ingenious kit could convert any existing truck into a go-anywhere mountain goat in a matter of hours. This promotional film shows a converted 1957 truck powering up Pikes Peak, subjecting it to battering terrain with no damage. The conversion into 4×4 ability had minimal changes to the chassis itself. NAPCO’s Powr-Pak kit did not void the warranty since there was no frame cutting required. It was simply a bolt-on conversion which only needed four holes drilled into the chassis. The best part is when it was time to trade-in the truck, the kit could be removed and quickly installed onto the newer model.

By the mid-1950s, General Motors Corp. was riding high with their truck designs of greater advancement and more power. The GM’s Task Force Series was introduced late 1955 with the purpose of appealing to passenger car buyers. These trucks were modern and sleek in style, equipped with comfort and safety features that made them such a pleasure to drive, yet still had rugged versatility. It was also the first year V8 engines were made available in GMC trucks, providing more power than the L6 engines.

GMC upped the ante a couple years later when they introduced the Blue Chip “Money-Maker” seen here. It attracted more consumers to the brand with its wrap-around rear window, panoramic windshield, well-proportioned lines, and a flatter hood than on previous models. Ad copy of the era stated this newer model’s V8 had a 39% increase in horsepower and the most power of any light-duty ever built. The ad claims this GMC Blue Chip would breeze through any job regardless of terrain or load. The copy put it simply, “Why hand out your good money for a V8 farm truck with only 145 or 150 horsepower – when this Blue Chip GMC give you 206?”

This specific GMC 100 is in our Tampa Showroom. Its “rebirth” was in December of 2017. It is a beautifully bright and metallic Cumulus Blue with a hint of pearl. The Big Machine completed its engine rebuild, while the transmission, transfer case, and NAPCO 4×4 rebuild was done by Jim Dowell Transmission. Other touches are the newer bed panels and modern AutoMeter gauges in the factory uncut dash. Also added was a classic in appearance but modern radio. Simply put it appears factory but has all modern internals and looks fantastic!

The GMC Blue Chip Series ended production in 1959 and was replaced by the GMC C/K (otherwise known as GMC Sierra). The following year marked the beginning of the end for NAPCO’s Powr-Pak kits. In 1960 GM changed their truck chassis on both Chevy and GMC models. The redesign featured independent front suspension on their two-wheel drive trucks and a factory-designed 4×4 option, making Powr-Pak kits irrelevant on their models.

When NAPCO lost the contracts with GM to supply conversion packages, demand plummeted overnight. NAPCO sold the rights to the DANA Corporation in 1961. They were later renamed NAPCO International and today still produce equipment and parts for the military. 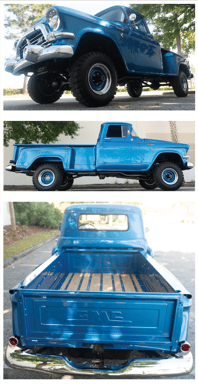 NAPCO’s Powr-Pak conversion kits were groundbreaking both literally and figuratively. They were greatly responsible for the popularization of efficient and economical factory 4×4 trucks becoming available to the American public. They proved a demand existed for rugged four-wheel-drive trucks and were important for off-road enthusiasts in the 1950s, as they ushered in the early days of the off-road aftermarket that exists today.

Sixty years later and these trucks are still considered durable and versatile. They are highly sought after by NAPCO enthusiasts, for they are quite rare. Since the company’s absorption into DANA, these records were not archived. Making the exact number of NAPCO Powr-Pak conversion kits that were sold unknown. However, the number is thought to be under 2,000 in all.

Granted, you probably do not want to give this beautiful GMC 100 any trail stripes, but if you would like to learn more about it, please contact our team in the Tampa Showroom.