The automotive industry began in the 1860s as hundreds of manufacturers raced to create the first horseless carriage. Studebaker was a wagon and automobile manufacturer based in South Bend, Indiana and was one of the first in automobile production in the United States. The company produced their first automobile in 1897, although it did not go into production until 1902.

Studebaker being consistently independent, different, and daring, introduced the first-generation Champion line in 1939. Its purpose was to be light and economical and was the origination of the family-sized compact. It was a huge success, generating unusually high sales for its economic-friendly cost, size, and being one of the lightest cars available at the time. The Champion (and the Commander) model had three different trim levels available. The most basic level was the Custom, followed by the Deluxe model, and top of the line was the Regal.

World War II put a pause on civilian transportation production as all American automotive manufacturers retooled to assist with the war effort. Once the war ended, Studebaker moved fast to capture the post-war automotive market share. They completely redesigned the Champion and the Commander with a radical new body. These were the first new cars available after World War II. The Champion was so successful it held 65.08% of the Studebaker’s total sales in 1947, yet by 1949 Studebaker felt it needed a newer model to impress the public.

In 1950, Americans expected to travel widely in their cars and wanted their vehicles to reflect their personalities. Studebaker took a distinct departure from the art deco styling of the 1930s by offering more radical revisions and styling changes which resulted in a more dynamic and ultramodern body style. Enter Raymond Loewy, the most influential industrial designers of the 20th century and Robert E. Bourke, the automotive stylist with whom Loewy collaborated on the new design.

Loewy suggested Bourke model the car’s appearance after an airplane. Bourke answered the challenge with what became one of Studebaker’s signature features. He took the earlier model’s semi-flat grill and gave it a flamboyant chrome “bullet nose” in its redesign, providing a futuristic look and a space aged sci-fi flare. The nose is often referred to as the “spinner” or a propeller due to the resemblance of such aviation mechanics.

Studebaker was riding high by 1951 with record sales. Their vehicles looked expensive but were affordable. Studebaker capitalized on it by advertising owners would get noticed while saving money. Ad copy often centered on the elegance of the Studebaker Champion, referring to plenty of “stretch-out” room, perfect balance, and a ride so smooth it was like a skyway glide. Their early advertisements were aggressively establishing Studebaker as a low-priced alternative to Chevrolet, Plymouth, and Ford, but not just for the car itself but also its gas economy. Other ads stated the decrease in overall weight and cleaner lines meant the vehicle did not squander power needlessly and saved trips to the pump.

Keeping in line with the vehicle’s affordability, Champions used the 169.5-cid 85 hp flathead six-engine in 1950 and 1951, while the Commander came with a standard V8. Studebaker’s greatest historical significance went beyond styling, it was their pioneering ingenuity. The company introduced both a V8 engine and an automatic transmission midway through the 1950 car season. They did these expensive undertakings well before any other independent, yet their new transmission was considered superior. It was air-cooled and included a feature that prevented the car from rolling downhill on inclines, and was appropriately dubbed the “hill-holder.” 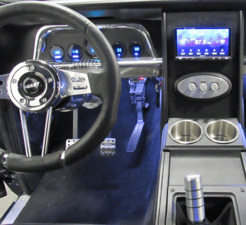 Their new transmission was so good, Ford requested Studebaker supply some for several vehicles they were building in 1951. Unfortunately, management refused to make its automatic transmission available. Passing on what could have been a profitable relationship proved unwise, because five years later Studebakers were running Ford inspired transmissions.

As previously mentioned, in both 1950 and 1951 Studebaker recorded high sales numbers of its cars and trucks, yet its profits dropped by 50%. First, being an independent automaker, they were at a disadvantage to the Big Three who had large economies of scale. Also, their development of the automatic transmission and V8 engine proved costly. More so for the engine, since it had problems that cost millions of dollars to fix. Plus, offering the V8 increased the vehicle’s weight, which undercut its handling and gas mileage the company promoted so heavily.

Studebaker added to their demise making other bad decisions that only compounded the inevitable. Declining what could have been a viably profitable relationship was not the only gaffe made. Studebaker invested huge in an overly ambitious expansion effort after WWII. They also burdened themselves with unusually high platform costs with their redesigns in 1947, 1950, and 1953 — twice as many redesigns as other independents.

These new facilities and product decisions were made with expectations that postwar sales would grow substantially. A good theory, yet none of the independent automakers truly benefited from Americans’ pent-up appetite for cars — even though the U.S. production increased by 36%. Another major error made by Studebaker execs was their continued substantial increases issued to shareholders instead of retaining some profits for future R&D efforts. 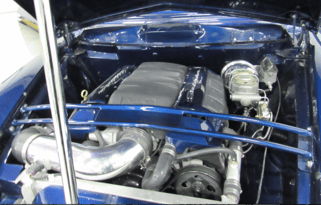 The Studebaker company went defunct in November of 1967.

This beautifully rebirthed 1951 Studebaker Champion can be found in our Indianapolis Showroom. Built by American Classics Restoration it is a prime example of blending a piece of history with modern touches. The customized digital instrument digital instrument clusters and gauges with the LED lit interior, make the interior just as eye catching as the exterior. The stylish suicide suicide back doors offer more interior space and greater ease of access. Best of all its flathead six engine was replaced with a high-performance LS3 from a 2015 Chevy Corvette boasting a mere 722 miles and mated to a modern 6-speed manual transmission.

Looking to break this baby in?!  Please contact our team in the Indianapolis Showroom for more information.