Plymouth was a brand of automobiles launched in 1928 and produced by Chrysler Corporation to compete against Chevrolet and Ford in the “low-priced” market segment. Plymouth became the leader of the low-price field by the mid-1930s. At this time The Depression was easing and the Plymouth brand ensured the survival of the Chrysler Corporation while many other car companies went defunct. The brand was a success and became Chrysler’s high-volume seller well into the late 1990s.

Coachbuilders often built the actual bodies for the automakers in the early days of the automotive industry.  This was when the passenger compartment portion of a vehicle was made of hardwood, since stamped steel was expensive. Before 1910, wood was the standard material for these carriage makers. Eventually, steel became the norm as the costs turned more economical and due to its greater strength, safety, and durability.

The Woodie originated from these early body-on-frame construction variants. These were traditionally built by third-party companies from a bare rolling chassis. It was a modern interpretation of the earlier horse-drawn wagons. Despite steel improving durability and strength, customers continued to desire the warm look of wood. As steel stamping became economically commonplace, genuine wood became a luxury. Its sheer craftsmanship took more care and cost and was truly artisan. As a result, Woodies became prestigious with their lovely polished wooden ribs and slats like that of a schooner sailboat. 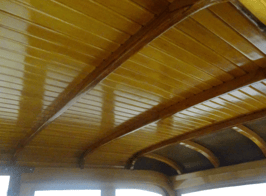 These early Plymouth wagons were called “Woodies” because of their construction, but they also went by other names.  Some pre-Plymouth Woodies were called Depot Hacks in the 1920s. Also at this time, a merchant of fruits and vegetables would use what was known as a Huckster Wagon. Woodies were created to carry passengers. Their modified back ends were ideal for carrying considerable amounts of luggage, which is why they were also known as “Carryalls,” “Estate Cars,” and “Suburbans.” The name that stuck, was “Station Wagon” because of their primary use as a taxi from the country estate to the train station.

Plymouth’s first official station wagon was built upon their Deluxe PE chassis by U.S. Body & Forging Company in 1934. Officially it was known as the Plymouth Westchester Semi-Sedan Suburban and was made available to the public in April of that year. The Westchester Suburban could seat up to 8 passengers and was equipped with three sets of seats. The last two sets could be removed for the purposes of hauling of cargo. USBF constructed only 35 of these cottonwood panels on a modified passenger chassis. Unfortunately, none from this first model year survived.

Chrysler Corporation developed the Floating Power technology in the 1920s to reduce vibration. It was a new means of attaching an engine to its chassis and advertisements for the Westchester promoted its riding comfort. Other technological advancements came the following model years. 1935 brought a stronger new double-drop frame with central X-brace. Also added was a new Sway Eliminator and kick shackle. Ads touted it having “rattle-proof” seats and being the best engineered chassis of any low-priced car. The usefulness of the Station Wagon became apparent to Plymouth buyers. Production swelled to 119 units in 1935 and 309 units in 1936 at the same price point.

Plymouth Woodie Station Wagons continued for several decades until 1949. They were simply no longer feasible to build as an economy class, and that year Plymouth introduced the industry’s first all-steel body station wagon. The 1953 Buick Estate Wagon is the last true American Woodie, despite it having all-steel doors with wood panels.

Interest in genuine Woodies dropped, due to increasing cost of production and their lack of durability, but its renaissance happened because of a cultural shift. The Woodie’s iconic status has nothing to do with its original estate purpose, but for its usefulness in transporting Malibu surfboards from beach to beach in the ‘50s and ‘60s. This second life was prominent in SoCal, thanks in part due to the local climate helping preserve the wood and The Beach Boys fever sweeping across the nation. 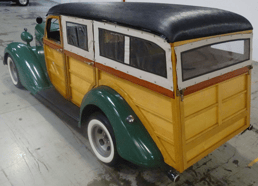 Today true Woodies are a rarity. They are no longer cheap, rather they are now prized possessions and highly sought after. This example is only one of two that still exist of the original 309 that were manufactured for the 1936 model year. This Westchester has over $100K in restoration receipts detailing its rebirth. It is a beauty to behold and would be the talk of any event.

If you would like to learn more about this 1936 Plymouth Westchester, please contact our team in the Philadelphia Showroom.