Amphibious automobiles were conceived early in large-scale automotive production, but their development was significantly increased during the Second World War. The more contemporary and purely recreational amphibian cars truly began in the 1960s with the Amphicar Model 770.

Launched at the 1961 New York Auto Show, the Amphicar Model 770 was made in Germany until production stopped in 1965. Its engine had slightly more power output than the Triumph Herald because of its shorter exhaust. On the road it could reach 70mph. Yet, its wheels created drag and the top 7 knots speed in the water was a disappointment.

Enter the Hydra Spyder made by Cool Amphibious Manufacturers International (CAMI). Founded by inventor John Giljam and his wife Julie, CAMI is a manufacturer based in South Carolina who since 1999 have specialized in designing and creating original build amphibious vehicles. Their portfolio of such versatile vehicles includes an amphibious luxury RV, amphibious tour buses, search & rescue vehicles, and for high-performance fun, the Hydra Spyder.

The Hydra Spyder is ultra-modern, stylish, and ensures its owner looks cool on land or water. The secret behind its ability to be both sportscar and speedboat with similar performance power is in its build. For increased speed and performance, its upper body is constructed using light weight fiberglass. While the lower hull of the Hydra Spyder is constructed with elaborately formed 5052 aluminum alloy. All built from the ground up, such aluminum alloy is quite malleable in its soft annealing form and has high strength levels when hardened. It also is especially useful because of its increased resistance to caustic environments and as a result it is the preferred alloy for marine applications, since it does not weaken with time.

Using these materials reduces its weight to only 3,300 pounds, despite its bulky proportions. All the hull cavities are filled with positive floatation foam approved by the US Coast Guard, making positive buoyancy assured. Unlike the Titanic, this vehicle is truly unsinkable. According to inventor John Giljam, “You could flood the motor, knock a 12-inch hole in the Spyder’s bottom, and still it would float.”

This lightened body allows increased speed and performance on the road and on the water. The Hydra Spyder comfortably seats up to four people, with individual bucket seats for the driver and passenger and a bench rear seat. Top speed on land is 125 miles per hour, with a speed of 46 knots (52.9 mph) in the water. Whereas the previously mentioned German Amphicar could only muster a dash speed of just 7 mph, the Hydra Spyder by comparison has enough horsepower to tow a water skier and drench everyone with a curtain of spume when cornering until one gets the hang of it. 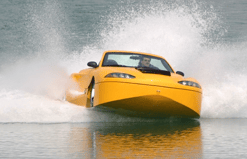 Why own a speedboat, a truck to tow it, and a sportscar for those weekends when not on the water when the Hydra Spyder exists? Simply drive directly into the body of water and toggle the switch on the dashboard into “marine mode.” This drops the clutch, disengages road drivability, shifts the transmission into aquatic duty, and retracts the wheels to create the flat hull for a smoother boating experience and less drag.

This is 1 of only 6 2008 Hydra Spyder vehicles to ever exist, making it a super rare amphibious vehicle. Its performance is unparalleled on both water and land, and so rare you are unlikely to ever see another in person again. If you would like to learn more about this Hydra Spyder, please contact our team in our St. Louis Showroom.